A set of scattered clues are given. Work out your brain to give the answer to the question in capitals....

" MCMXLIX is the Roman numeral representation of the year of our concern. 50 years later he made his debut in a famous game. WHAT IS THE SCIENTIFIC NAME OF THE ORGANISM? "
copyrighted to Quiz Champion No comments:

1. Sao Shwe Thaik was the first president of which Asian country?
2.What was the name of the operation that terminated the terrorist attack in hotel Taj in Mumbai?
3.Who wrote the famous book "the silent spring"?
4. Which actress won the Oscar award the most number of times?
5. What is the scientific name of Gorilla?
copyrighted to Quiz Champion 2 comments: 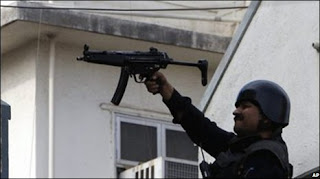 picture courtsy:BBC
The scenes in Mumbai were dreadful but not unexpected.
The hurricane of terrorism was terminated temporarily by Operation Cyclone. Do you think the cities of India are safe?
Never, the security system of India is doing an otiose duty.
The report of BBC ridicules the Indian Commando system because they took hours to reach the site of terrorism.
The resignation of Sivraj Patel is not the solution to this situation.
India has a secret security service but why cann't they give a useful alert?
This shows the falling of the security system of india.....

Security experts have criticised the response to the attacks, which left nearly
200 people dead, as "amateurish, sluggish and feeble".
Indian intelligence
agencies are leaking information that they gave about half a dozen warnings to
the government in Maharashtra state - of which Mumbai is the capital.
The
reports say Maharashtra was warned that strikes were being planned on city
landmarks, including, possibly, the Taj Mahal hotel at the historic Gateway of
India.
Authorities in Mumbai flatly deny that they received any tip-offs.
"It is unimaginable that we would have got this sensitive information and not
react," says state Interior Secretary Chitkala Zutshi.

The security system of India is a leaking hand.
It faces the problem of Infiltration of terrorists.
Whenever a warning reaches the secret agents it is leaked so that the terrorists can change their plans.
Government has to take proper care to this matter because we can still be afraid of the Indian coasts.
copyrighted to Quiz Champion No comments: